Scythebill 14.0.0 is now available.  This version adds a long-requested feature - you can now store sightings for multiple observers in a single .bsxm file!  This is a new enough feature that I'm calling it a beta.  I've tested it as I can, as always, but I wouldn't be surprised if there isn't a glitch here or there.  (There's enough features now that testing all combinations is getting increasingly hard.)

I could really use your help  - even if you don't use this feature - in testing it out and letting me know if things are working or not!  And if you do use the feature, please let me know if any part of it is confusing or just doesn't work the way you'd expect it to.  I'm sure there'll be things to improve!

I also haven't yet updated the manual to describe supporting multiple observers, but this page will include a quick walk-through of the feature.

There's also a bunch of other bug fixes in this version, described below.

As always, download here, and let me know if you have any problems, either on Google+, Facebook, or by email.

You'll get a window asking you to enter your first observer.  Enter a name, and click OK: 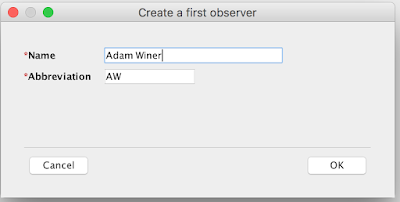 After that, you can add more observers with the "Add..." button on the Preferences pane:

(You'll need to use bulk editing in Show reports... if you want to add a second, third, etc. observer to more sightings.)

From this point on, when you're adding sightings, you'll get a chance to choose the "Who?" in addition to "When?" and Where?"  (If you don't enable multiple observers, you won't see this box, or any of the other changes.)

(To add entirely new observers, you currently have to go to the Preferences window;  here, you add observers already entered in Preferences.  That might be a confusing choice on my part... let me know!)

Beyond that, there's:
I'll be updating the manual to fully describe this feature, but this should be enough to get most of you started.

Again, I'd enormously appreciate any feedback you have on this feature - what works well, and what doesn't work for you.

If you add a lot of photos to a sighting, the later ones would become invisible.  Those now pack a bit more tightly into the screen and a scrollbar appears if you have a lot.

"Save a copy as..." will now ensure that you have a file name ending in .bsxm.

Google geocoding was sometimes picking latitudes and longitudes for the entirely wrong state/province (for example, "Springfield" in the United States was always the lat-long of the city of that name in Massachusetts!).

Scythebill should do a better job of choosing decent fonts on Linux.

Locations with a slash in their names gave unexpected results when exporting to CSVs or spreadsheets on MacOS or Linux.