Scythebill 15.7.5 is now available!  Its main feature is the new eBird/Clements 2022 taxonomy.  As always, download here, and let me know if you have any problems, either on Facebook or by email.

Update: 15.7.6 was released on November 9.  It includes a few small improvements, but the most notable change is improved country checklists.  In particular, I'd completely flipped the ranges of Black-faced Bunting and Masked Bunting in 15.7.5, so if Scythebill auto-resolved this split for you, it may have gotten it wrong. You can always use "Verify against checklists..." in the File menu to look for sightings that may have the wrong species.

The 2022 update of the eBird/Clements taxonomy is finally here, and it's a big one, with 118 new species from splits (and 41 lumps).  If you're a North American birder, this introduces just the Chihuahuan Meadowlark.  But if you've spent much time birding in the neotropics or southeast Asia, there's a good chance you'll have a lot of armchair ticks awaiting you.
As always, Scythebill will automatically handle the upgrade as much as possible, and use its checklists to automate splits where possible.  When you're done with the upgrade, visit the Splits and Lumps "special report" to see what's changed since 2021.  (For me, I had a whopping 31 gained against just 2 lost.)

There's also been some species where subspecies have been rearranged - moved from one species to another - which may give you some work even if there isn't truly a split.  This year, examples include:

Other changes in this are fairly minor:
Posted by Adam Winer at 2:19 PM No comments:

Scythebill 15.7.4 is now available!  Its main feature is the new IOC 12.2 taxonomy.  As always, download here, and let me know if you have any problems, either on Facebook or by email.

The IOC 12.2 taxonomy is just released.  It's a comparatively small update in terms of the total number of splits, but it does include the latest AOS changes (like Chihuahuan Meadowlark).  You can see the full list of splits and lumps on the IOC site, or you can visit the "Splits and Lumps" report after installing to see what changed with your list. 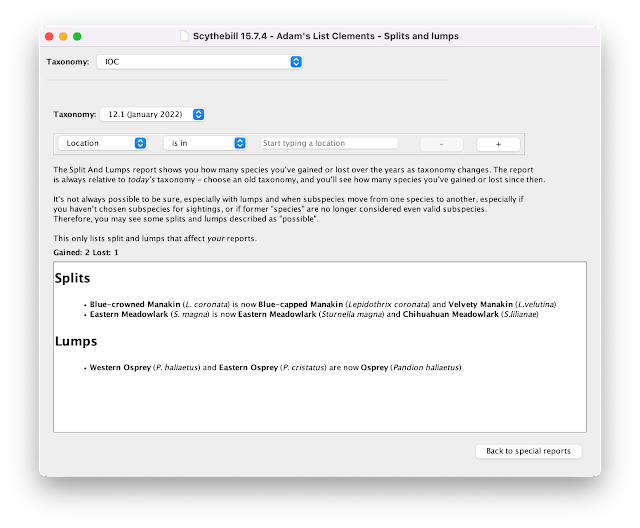 Note: If you've seen White-crowned or Mocking Cliff Chats - two African species - and have not assigned subspecies directly, you may have some slightly ugly results here, as subspecies were reassigned in both directions.

Other changes in this release are relatively minor - it's been just six weeks since the last release.  But a few other changes are included:
Posted by Adam Winer at 10:39 AM No comments:

Scythebill 15.7 is now available!  It's a smaller releases, with some internal upgrades, lat/long improvements, and a few small fixes.  As always, download here, and let me know if you have any problems, either on Facebook or by email.

15.7.1 was released on June 12th with a fix for MacOS only (writing CSVs failed)

15.7.2 was released on June 20th with a few more small fixes;  ABA region reports were broken in 15.7.0 for about half of users, and saving as a spreadsheet failed for MacOS.

Scythebill runs on top of the Java platform.  You don't have to know that - it packages Java internally, so you don't need to install Java.  But it's been awhile since I've updated that internally packaged version, and I've jumped from Java 10 to Java 17.  What does this mean to most of you?  Nothing!  But - it does make me a bit more worried about compatibility problems and odd bugs than I am with most releases.  Please do let me know if you see anything going wrong - especially if you're running an older operating system.

Posted by Adam Winer at 5:39 PM No comments:

Scythebill 15.6 is now available with the just-released IOC 12.1 and a number of small refinements.  As always, download here, and let me know if you have any problems, either on Facebook or by email.

The IOC 12.1 taxonomy was just released.  It's a comparatively small one as far as splits and lumps go, with the majority in Asia and Australasia.  See that list of changes on the IOC site.
This new taxonomy does include, for the first time, bird name translations in Serbian and Turkish;  you can try these out from the Preferences page.

Scythebill now offers a "Restrained" sighting status - for birds you see in-hand, or in a mistnet, or similar circumstances.  In North America, the American Birding Association's recording rules require that birds be unrestrained, and by default these sightings will not be considered "countable".  But you can go to the Preferences page and make them countable if you wish.
If you mistyped a year, you might accidentally enter a checklist from the distant past or far future (the years "202" or "2202").  Scythebill will now warn you before proceeding when you enter these years on Enter Sightings.
The "Big day/year" report now properly supports "First sighting" reports.  So you can go, year by year, and see which year (or even day) you had the most lifers.
Posted by Adam Winer at 8:25 PM No comments: