Scythebill 12.2 is now available!  This release has a variety of smaller features, and some important bug fixes.  As always, download here, and let me know if you have any problems, either on Google+, Facebook, or by email.  The news this time includes:

The Scythebill checklists have made it easy to find out what lifers you can see in hundreds of areas of the world.  And you can always find out what would be new for your list right there - what Indian species would be new for your Indian list, for example.  But they haven't let you answer questions like:
All these questions are easy to answer now!

Start with Browse by location, then:
If you'd like to exclude rarities, just check the new Hide rarities? option.

Thanks to Jochen B. for the feature idea.

Scythebill's new Map of world lifers... menu item (in the File menu) brings up a map of the world with each country color-coded for how many lifers are waiting for you there.  Here's my map: 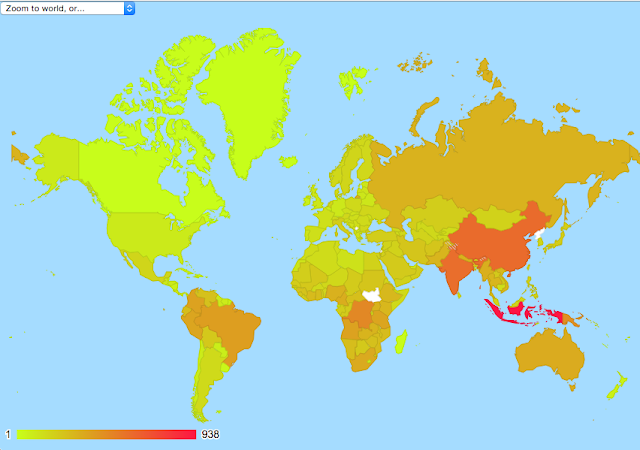 You can also zoom into a specific region of the world with a small menu in the upper left: 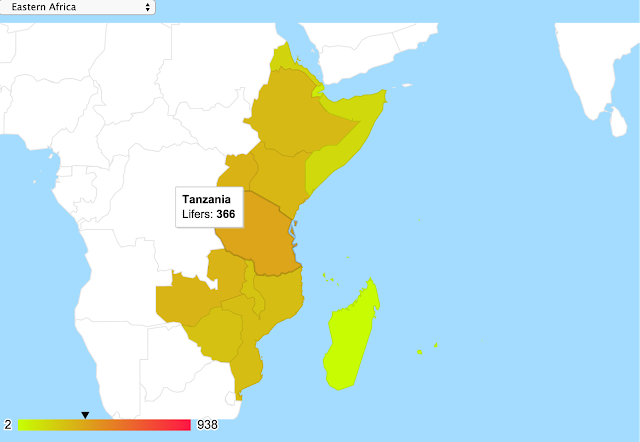 Many countries around the world have offshore states or territories that do not fit into ordinary geographic bounds.  For example, the US state of Hawaii is in the Pacific Ocean, not North America, so that needs to be separated to keep our "North America" lists in proper form.  I've cleaned this up for a number of other countries:
All of this is more geographically accurate, to be sure, but it made calculating a full country list much harder.  To fix this, I've added a slew of "magic" locations:
You can find the full definition of each of these in the online manual.

Lots of checklists have been cleaned up in this release.  In particular, I've finished manually verifying and setting rarity status checklists for all of North America (including Central America and the West Indies), making this the third completed continent (after South America and Africa);  this required corrections to:
(Whenever I tackle this, I tend to find some humorous mistakes.  This time the winner came from the El Salvador checklist, which was missing Great Blue Heron - and instead had Great-billed Heron, which would be an impressive range extension from southeast Asia!)

I've also reconciled the checklists (setting "rarity" status and adding/removing species as needed) for:
And there are brand new checklists for:
There's additional, smaller fixes in southern Africa, the Indian Ocean, Costa Rica, and Peru.

I've fixed a couple of problems with the photos code added in the last release.
Posted by Adam Winer at 6:20 PM