Scythebill 12.7 - "Search nearby", BirdLasser, and more

Update: I've released Scythebill 12.7.1, with two small fixes.  The new BirdLasser import failed for some date formats;  it now should reliably import.  Also, location detection would sometimes fail to detect the state/province of a location (only finding the country);  it should now be more reliable.

Original note: Scythebill 12.7 is here! As always, download here, and let me know if you have any problems, either on Google+, Facebook, or by email.

This release adds a few relatively small features that you've been requesting:


When you were entering a new location, Scythebill previously would first show you a latitude and longitude from a Google service.  If you wanted to get information from eBird, you had to click another button ("Ignore Google result?") to get to it.   Now Scythebill will load from both simultaneously, so it's much easier to get to eBird results.

Also, once you have a latitude and longitude entered, Scythebill will show you a new Search nearby button.  This will look for eBird and Google results near that location.  This makes it much easier to pick eBird hotspots.

Visit data - like comments, distance covered, duration, eBird protocol - used to be fairly buried, hidden away in Browse by location.  It's still there - but it's now much easier to get to.  Any time you're looking at a single sighting, you'll have a Visit data... button: 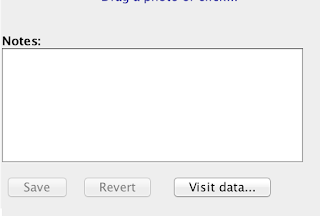 Click that button, and you'll get a dialog where you can see (and edit) the visit data for that visit.

Visit data's also more useful, as you can now create reports based on Visit comments text from Show reports:

Domestic forms are never countable - they're used for those flocks of domestic ducks (and others) that might have some wild genes remaining, but are genetically not the same as wild individuals, even if they are established, breeding populations.  They are, nonetheless, very much part of the eBird taxonomy, and this will make it much easier to export to (and import from) eBird when you've recorded these individuals.

Scythebill now supports imports from BirdLasser, an Android and iOS app for recording South African bird sightings.  This support is somewhat experimental, as BirdLasser has a very different location model (latitude/longitude for each sighting) from Scythebill;  Scythebill will do what it can to automatically find nearby locations using eBird and Google.   Let me know how this works if you can try it!

Some eBird checklists wouldn't import (as they had a hitherto-unknown-to-me date format); that's now fixed.

Avisys exports now proceed smoothly even when most of the rightmost columns have been removed.

There's a new Backup now... button on the preferences page, if you want to force an immediate backup after lots of data entry.

The "Complete list of sightings?" checkbox was far too easy to overlook when entering sightings.  I've added another place to select that option on the prior page, where the rest of the visit information is entered.

Scythebill now allows you to enter "Dead" as a sighting status, for those unfortunate occasions when you record a deceased bird.  Such sightings will never be counted as lifers or any other species totals, but will be included in eBird exports.

This time around, there's a number of small improvements to the checklists of the Azores, France, Sulawesi, Mauritania, Morocco, Uruguay, Ecuador, Colombia, Mexico, and New Zealand, as well as a number of first country records from the Western Palearctic and first provincial records from Canada.

The built-in state checklists for Indonesian states will now be available even if you've rearranged the built-in locations a bit (moving Indonesia to an "Oriental Region" or something similar).

Bulk date editing would fail if you only entered a partial date (e.g. changing the year of a large number of records).  That's fixed.

If you dragged photos into Scythebill on MacOS, those photos might fail to display when later clicked-on.  That's fixed too.

A couple of uncommon (and harmless but annoying) cases where error dialogs would appear have been fixed.
Posted by Adam Winer at 9:24 PM