Scythebill 12.8.2 is here! As always, download here, and let me know if you have any problems, either on Google+, Facebook, or by email.

This version was largely released to fix a bug that affected first-time users, but while in, I've fixed a few other things and added some small new features.

Previously, the only straightforward way to allocate sightings to subspecies after initial data entry was to visit Browse by species and manually drag species onto the desired subspecies.

Now, any time you've selected one (or more) sightings (from any page), you'll see a new menu: 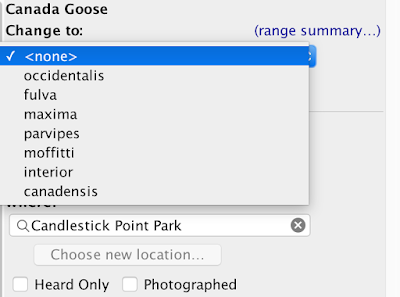 You can use this menu to move that sighting (or sightings) to a new subspecies.  The range of each subspecies will appear when selected;  but if you'd like to see all the ranges at once, click (range summary...) and you'll get an overview of just that:

And if you're a true obsessive for subspecies entry, there's a new option in Show reports.  Ask for "subspecies" "is not allocated", and you'll get all the sightings that are not yet assigned to subspecies (but could be - monotypic species are not included).

If multiple people want to keep lists with Scythebill on the same computer, they need to create multiple .bsxm files.  That works fine - but each time it's opened, Scythebill has only re-opened one of those files (the last one opened).

Now, Scythebill will re-open all the files, each time.

Scythebill 12.8.0 introduced a bug that affected first-time users;  those that imported directly from the first screen could fail with an error.  That's fixed (and that's the reason for this release coming when it does).

The country code "ZO" is now supported for Avisys imports as "South Polar Region".
Posted by Adam Winer at 10:56 PM