Scythebill 13.5.0 is now available!  As always, download here, and let me know if you have any problems, either on Google+, Facebook, or by email.   This release includes the IOC 7.1 list, and (at long last), IOC users get the same easy resolution on upgrade that eBird/Clements users have come to expect.

Previously, upgrading to a new IOC list forced you to manually visit Show reports to track down any splits, and resolve them one-by-one (if you remembered!).

Now - if you have any affected sightings - you'll see a screen like this one: 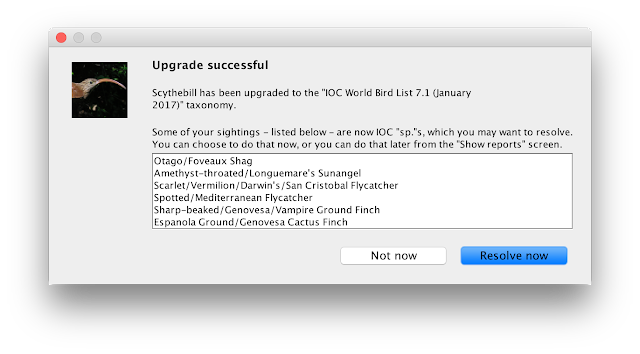 If you click Not now (perhaps you don't really use IOC), you'll be done.  Otherwise, click Resolve now, and you'll get another screen: 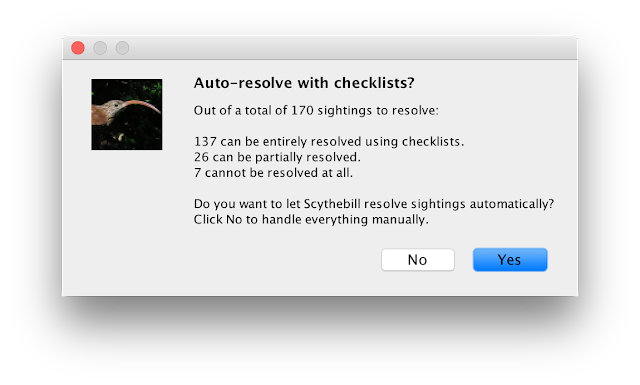 Scythebill's used its checklists to automatically fix most of your sightings, and reduce the number of choices for most of what's left.  (In this case, for example, Scythebill doesn't have single island checklists for the Galapagos, so those splits can't be automated.)  If you don't trust the checklists, you can click No and do all the work yourself - or you can click Yes, and let Scythebill do most of the work for you;  if there's still some splits left, you'll get one last screen to manually resolve whatever Scythebill couldn't handle. 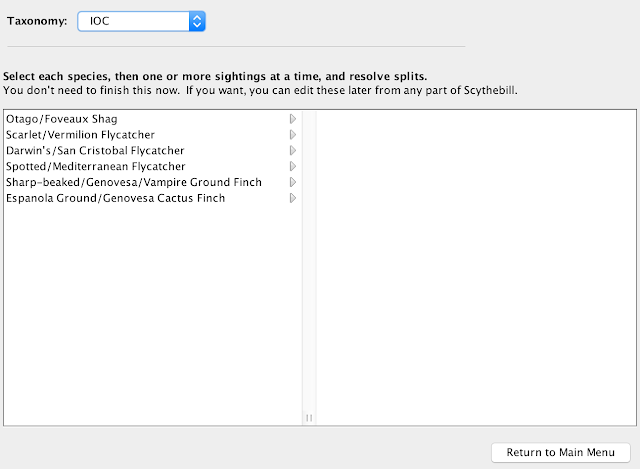 Hopefully, this will make things far simpler for IOC users to keep up with all the splits headed our way.

One change that is not automatically handled for IOC users this time around is a subtle change in the IOC's split between Eastern and Western Barn Owl.  In IOC 6.4, the boundary between the two forms was in the Lesser Sundas, in Eastern Indonesia.  In IOC 7.1, this has changed - everything west through Pakistan (subspecies stertens and javanica) is now part of Eastern Barn Owl.  So if you've got sightings in Western Barn Owl from South or Southeastern Asia, and did not assign those sightings to one of those subspecies, you'll have to move the sightings yourself to Eastern Barn Owl.

The Mozambique state of Maputo is now properly included in the "Southern Africa" report.

Scythebill has its usual suite of checklist improvements. In this release, I've finished comparing the Scythebill checklists against all the eBird checklists, handling all the countries from T(anzania) to Z(imbabwe).  A number of recent first country records have also been added.