Update: Scythebill 14.7.1 was released on August 28, 2019.  Most importantly, it fixes a bug that broke all "save as spreadsheet" features.  It's also got some small improvements to checklists and the new German translation.

Original post: Scythebill 14.7.0 is now available, with the brand-new eBird/Clements 2019 taxonomy, translation into German, continent checklists, "tick" maps, and more.  As always, download here, and let me know if you have any problems, either on Facebook or by email.

This taxonomy was released two days ago, and it's a big one with more than 80 splits (some of them into as many as six ways, and 12 lumps.  Do you love White-eyes?  If you do, you'll love this update!  (If you've been using the IOC taxonomy, many of these will be old news to you - but it's excellent that these two taxonomies are now a fair bit closer.)

If you're interested in knowing more about what happened, I strongly recommend the (inherently lengthy) overview on the eBird website, especially if you need guidance with some of the more complicated changes (again, White-eyes!).

As always, Scythebill will work hard to automate as much of the update as possible.  And when you've updated, visit Special reports, then Splits and lumps, to see just what happened.  (I got 17 armchair ticks, and lost one.)

Scythebill is now available with a translation into German!  As is still the case with the Spanish translation, I need all the help I can get cleaning it up to use proper German.  If you speak German, and see anything off, please let me know.

Also, the Spanish translation is now more complete - in particular, there's translations for all the continent and country names, and a few pieces of text I'd missed in my previous efforts.

Scythebill finally supports automatic checklists for each of its built-in regions (North America, West Indies, Pacific Ocean, Europe, etc.).  This means you can finally get answers to things like "what West Indies endemics have I seen?  which haven't I seen?".  These checklists work with the Family report too.

As a critical part of this, Scythebill now has separate checklists for European and Asian Russia, and Asian and Australasian Indonesia.

The "Total ticks" special report has a new trick:  you can see color-coded maps of countries or states of the world, and how much you've seen in each place.  Just visit Special reports, then Total ticks, and click the new Total ticks map button.  Here's a country map (you can use a small menu at the upper-left to zoom in on various regions): 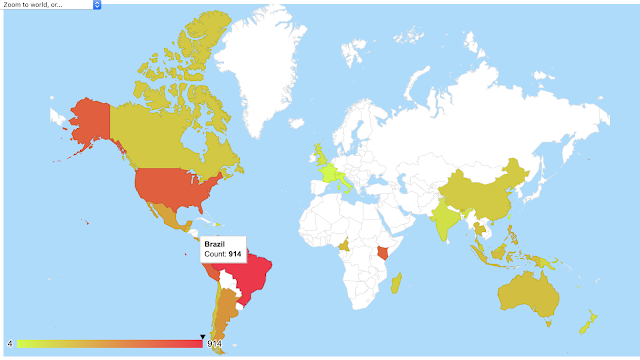 It's pretty clear that I need to spend a lot more time in Africa and Asia!

And if you switch from "Country" to "State" total ticks, and click that Total ticks map button again, you can look at your total ticks at the state level (switching between countries with that menu in the upper-left).  Here's Brazil: 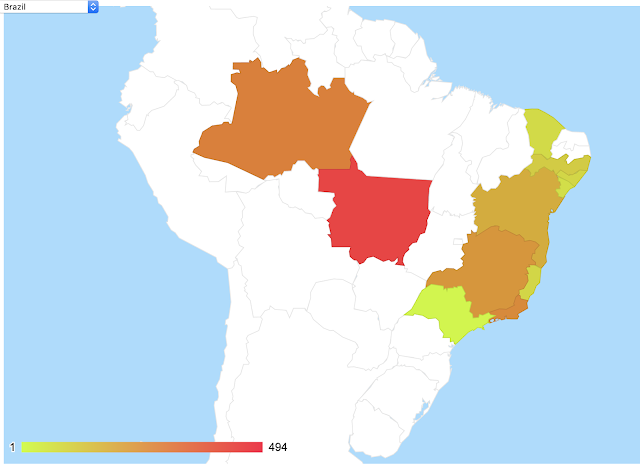 I'd really love to visit Paraná or Rio Grande do Sul!

Total tick maps are not supported for county ticks, unfortunately.  (They also don't show up for states in a few countries, like Kenya, Indonesia, or the UK).

Wings was birding software for MacOS (and perhaps Windows too?).  It's been defunct for some time, but Scythebill can now import directly from its exports. To prepare the exports from Wings, you'll need to do a series of exports, all in XML format:


From there, go to Imports in Scythebill, choose Wings imports, and in the file chooser that opens, select all eight XML files that you produced in Wings.  (I wish Wings had chosen to support a simpler export format for its locations, but alas it did not!)