Scythebill 15.4 is now available with the eBird/Clements 2021 taxonomy.  As always, download here, and let me know if you have any problems, either on Facebook or by email.

It's been two years since eBird has been able to update their taxonomy, and accordingly - this is is a big one!  There's 70 different splits from around the world (and 8 lumps), and one of those 70 is a whopping 13-way split of Rufous Antpitta!  There's even 11 species new to science!
As always, Scythebill works hard to make this as easy a process as possible, using updated country checklists to simplify the choices as much as possible - and sometimes doing all the work for you.
Some of the splits likely affect a lot of birders. To name just a few:
But there's so much more - visit the eBird site to get the full description, or skim the Appendix down below for a quick form of the list.
And after you've updated, visit the Splits and lumps report in "Special reports" to see a recap of everything that happened affecting your list.  (I gained 24, and lost 3.  Not bad for a pandemic year when I haven't made it more than 100 kilometers from home!) 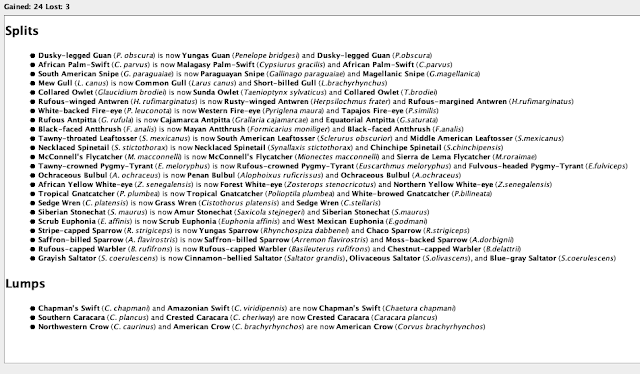 It's only been six weeks since the last release (when IOC 11.1 was released), so there hasn't been much time to get in other changes alongside the big taxonomic update, but here's a few changes that are worth noting: