Update (Sept. 22): I've released Scythebill 12.5.1, mostly to fix a bug when entering sightings for a new location.  Thanks to Robert M. for the report!  In addition, this version has further improvements for importing from Observado.org and Waarnemingen.be/.nl.

Original note: Scythebill 12.5 is here! As always, download here, and let me know if you have any problems, either on Google+, Facebook, or by email.  I'd been planning on holding this release for the IOC 5.4 checklist update (which will likely come late in October), but there were just too many goodies to hold back:
A note, perhaps on the negative side for some.  With this release, I've stopped including the "Snow Leopard" version for MacOS.  MacOS Snow Leopard was last updated 4 years ago, and hasn't been getting security updates for almost two years.  The Snow Leopard version of Scythebill has been getting very few downloads, and at least some of those appear to be accidental.  This isn't an irrevocable decision, so if there's some of you out there who depend on the Snow Leopard version, please let me know.

The preferences page now has a new option - you can choose whether you'd like weekly or monthly backups, and where you'd like those backups stored!

I strongly recommend that users choose a backup directory using a cloud provider like DropBox or Google Drive.  These services are free and will keep your data safe (and secure);  storing your backups on your local drive will not help you if your disk crashes or something worse happens. 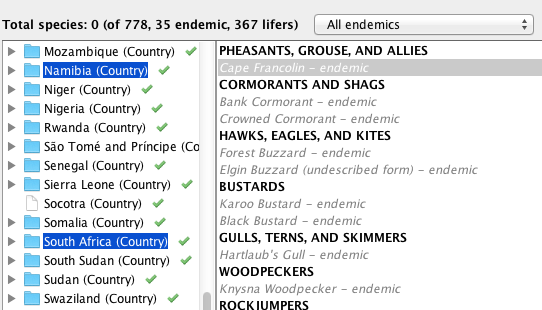 With that combined checklist, you get all the usual Scythebill features - saving as a spreadsheet, finding lifers, and so forth - and you can see that the combined region has 35 endemics.  And you can select as many locations as you want (add in Lesotho and Swaziland, and you're up to 61 shared endemics.)

Here's an old feature you may not know about:  just after clicking "Add species" when entering sightings, try typing a number.  The cursor will immediately jump to the Number field for that species, and you can enter a count;  hit Enter, and you'll jump right back to the species name field.

Observado.org (and Waarneming.nl) imports are now a lot better, with a slew of improvements:
I'd still describe the support here as beta-level;  in particular, Observado.org seems to be a work-in-progress with changing values (the meaning of the "simple CSV" checkbox changed in the last week), but it's definitely useable now.  Please let me know if you have any suggestions for improvements or find any problems!

Birdbase imports got one tweak.  Birdbase sightings saved as "uncertain" will now be imported into Scythebill as "Uncertain ID".  (Scythebill supports a richer set of "uncertain" statuses, like "Not established" and "Not accepted", so you might want to edit after importing.)

Finally, Scythebill-style imports got an important bugfix.  For the last couple of releases, imports failed if they didn't have a "Location 1" column - it could be an empty column, but it had to be there.  That's a bug, which is now fixed.


Fine-tuning of latitude and longitude, made easy

Scythebill has been able to automatically find the latitude and longitude of your birding spots using Google and eBird since Scythebill 12.0.  But when that feature wasn't quite right, with the selected highlight not exactly where you meant, there wasn't an easy way to fix it.

Now, clicking anywhere the map will update the latitude/longitude, and there's a new Zoom In button (a plus sign) to let you fine-tune that location, and a Zoom Out button (a minus sign) to double-check the location for relatively featureless parts of the world.

Checklist improvements (and some removals too)

I've cleaned up the Australian state checklists to the extent possible with online resources (Victoria and Northern Territory are still a bit sketchy, as I could not find official checklists).

On the other hand, I have entirely removed all of the checklists for the counties of the United Kingdom and Ireland.  These checklists contained many errors, and I saw no straightforward way to clean them up with available resources.  My apologies to anyone who found these useful;  I'd rather limit the officially supported checklists to those whose accuracy I can vouch for.

Other checklist improvements include:

Those are the big items, but there's a bunch of smaller items too:

Nearly all of these smaller improvements (and some of the bigger ones) came from ideas that started with users.  Thank you, and keep those ideas coming!
Posted by Adam Winer at 9:00 PM